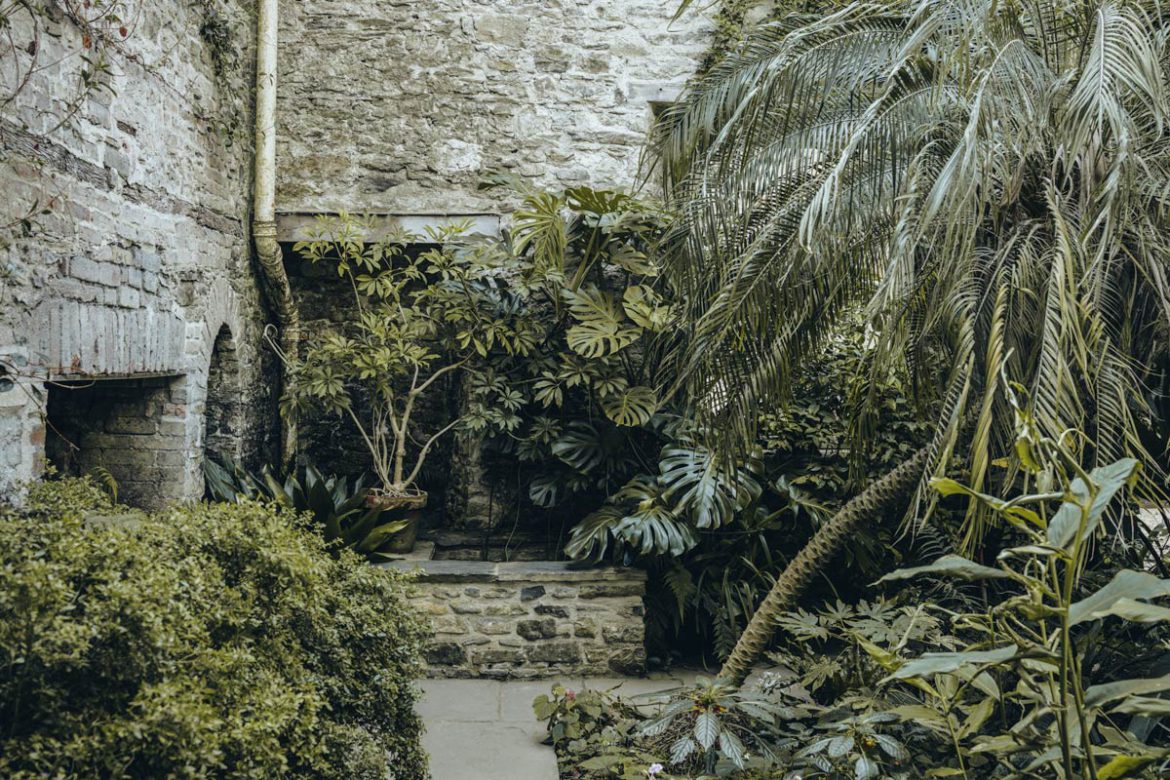 The restored medieval house and gardens of Aberglasney in rural West Wales hold many surprises for visitors, of which the Ninfarium is perhaps the most unexpected. Located in the very heart of the mansion, exotic plants weave between the ruinous walls, creating a lush sub-tropical garden beneath a glass atrium.

The Ninfarium was completed in 2005 and owes its name to the Garden of Ninfa in Italy, where a similar arrangement of medieval ruins and striking plants evoke a timeless beauty. The garden in Ninfa was created by the Caetani family, who once gave financial support to Wales’ most celebrated poet, Dylan Thomas.

The real magic of the Ninfarium is in how the boundary between inside and out is ambiguous. Windows in the restored part of the mansion offer glimpses out on to a garden of architectural cycads and palms, but it is not until you pass through the double doors beneath the grand staircase do you realise that the outside space is in fact another interior space.

Banana leaves poke through the frames of unglazed windows and Asparagus setaceus overflows in a bright green froth, using a drainpipe as a support. My current favourite plant, Begonia luxurians, looks splendid with its dark red stems and palm-like leaves against the pale stonework.

There are many subtle shifts in level as you pass through doorways to admire an understory of maidenhair ferns, peace lilies and metallic-leaved begonias. The occasional toadstool just adds to the enchantment.

There are several gardens to explore at Aberglasney, including an Elizabethan/Jacobean Cloister Garden with a raised parapet walk. I particularly enjoyed the Asiatic Garden, in which I saw plants I’d never seen growing in the UK before, originating from the likes of Tibet and Nepal. A sunken garden towards the lower end of the grounds I found to be particularly peaceful. The style and layout reminded me of Edwin Lutyens collaborations with Getrude Jekyll.

Yet it was the uniqueness and originality of the Ninfarium which kept drawing me back to observe the play of sunlight and leaf shadow across the stone walls throughout the day: it was one of the most magical ‘greenhouses’ I’ve ever visited.